Business corporation, Ministry of Gender Equality and Family and Chungcheongbuk-do made an agreement for secure of gender balance 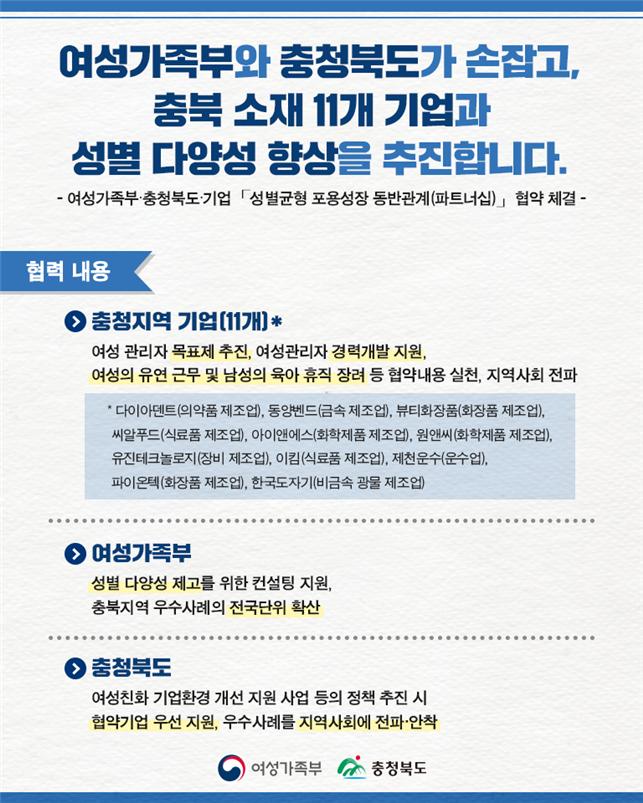 Ministry of Gender Equality and Family and Chungcheongbuk-do announced that conclude a voluntary agreement for secure gender balance with 11 companies in Chungbuk on 30 August 2020.

Chungchungbuk-do, which participates in the agreement for the first time among 17 metropolitan and provincial governments, plans to support to companies in the agreement priorly and spread best cases to local communities when implementing policies which are improving women-friendly business environment.

PION-TECH, DIADENT and EUGENE TECHNOLOGY are decided to promote maternity leave and infant leave care for not only women but also their spouses.

According to the Si-Jong Lee, Governor of ChungbuK, “We will take the initiative in realizing Chungbuk to be a first-class economy province where workers and businesses grow together by expanding women’s employment, enhancing gender diversity and creating a good organizational culture for women to work.” Jung-Ok Lee, Secretary of the Minister of Gender Equality and Family, said “We will make efforts to improve the gender diversity of small and medium-sized enterprises in the region by leading other local governments to practice.”